We are venturing out a bit more, as we learn to live with the pandemic, and recently visited friends in Portland, Maine. Having enjoyed a wonderful exhibit of weathervanes at the American Folk Art Museum last year, I am now on the look-out for these special sculptures and spotted this one at City Hall, very near our hotel.
The Press Hotel, our home away from home for a night, was very comfortable and is so-named as the building was the production headquarters for the Press Herald newspaper, part of the Gannett media empire, founded by Gus P. Gannett in 1923. A quote from a plaque mounted on the exterior of the building includes a quote from Mr. Gannett:

I have never regarded the newspaper as merely a piece of private property to be conducted for mercenary ends, but rather as an institution to be managed for the public good, and to be made a force in the community, for the promotion of the welfare of our city, state, section and nation.

The dcor of the hotel references its history and includes a collection of vintage typewriters mounted in a stairwell wall, below. 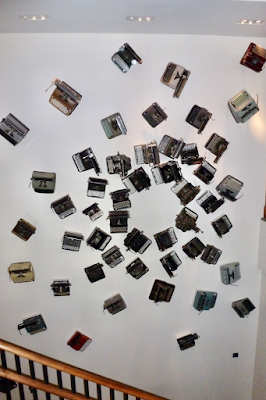 The print theme continues in textiles too, including custom carpet in the hallways, and, literally, writing on the wall - actual headlines from the newspaper.

You'll notice the headline "Weary fishermen can now get dinner at Becky's" - we weren't weary fishermen, but we nevertheless caught lunch at Becky's, a fun, busy waterfront diner.
Portland is still a working port, with many lobster fishermen.
The exteriors of some historic brick buildings still advertise the wares of former business occupants. The fading remnants of these old advertisements are called "ghost signs".
Words and letters can show up in unusual places too. The Press Hotel continues its typesetting theme even on its vehicles and directional signage.

Finally, I can heartily recommend this bakery. We brought back delicious treats to eat at home.

The Ladies' Paradise - The Way We Shop Now

I'm reading The Ladies Paradise, by Émile Zola, in an excellent translation by Brian Nelson.  Remember departments stores? A few survive - Macy's, Bloomingdale's, for example - but many perished even before the advent of online shopping.
But how did the department store itself evolve? This story is a fictionalized - but well-researched - account of the emergence of a modern department store in the heart of Paris, during the Second Empire (1852-1870).  But you don't have to know or care anything about the politics or history of the period to enjoy this story.  Anti-hero Octave Mouret is an entrepreneur who sees the great wealth generated during this period and the aspirational consumption which that wealth enables. A born salesman, and the manager-owner of The Paradise store, Mouret understands the benefits of innovations such as buying in quantity, the use of  "loss leaders" and, enabled by the lower cost of plate glass at this time, the enticement of street-level display windows. Mouret is based on Aristide Boucicaut, the founder of the French department store chain Bon Marché.
Prior to the development of the grand magasins (department stores), the shopper traipsed from small shop to small shop; each retailer specializing in one item or type of goods. One bought dress material from a draper, for example, and then gave the fabric and any trimming to a dressmaker.  If you needed an umbrella, you went to the umbrella maker.  Even during my youth in Detroit, home of the J. L. Hudson department store, my grandmother would say that "one could go from store to store to buy what was needed, or just go to Hudson's."
Assembling different types of goods - departments - under one roof was revolutionary.  Mouret's fictional store was a success, as he added a mail order catalog and home delivery, just as Boucicaut did in the real-life department store.  As goods were sold at The Paradise, they were packaged and sent down a chute to the basement dispatch area, for transfer to the delivery trucks:

During big sales especially, the chute would discharge an endless flow into the basement, silks from Lyons, woolens from England, linens from Flanders, calicoes from Alsace, prints from Rouen...

The Ladies' Paradise isn't a dry history though - the story unfolds through the eyes of the protagonist Denise, a penniless young woman, orphaned and fresh from the boondocks, hoping to find employment with her uncle, a Paris shop-keeper.  However the uncle's business is slowly being squeezed by The Paradise, and instead Denise finds employment with the enemy, so to speak, becoming a saleslady at The Paradise. Something about her sparks Mouret's interest in a way he finds unsettling, and the development of their relationship will keep you reading.  The introduction to the book is excellent too.
There's also a television series, The Paradise, very loosely based on the novel and relocated to England. The series, available on Amazon Prime, is better than reviews indicate, and at any rate the costumes are wonderful.  However, while Zola's book is clearly a critique of consumer exploitation and manipulation, the television show mostly celebrates one retail triumph after another, without much insight or reflection.
Posted by Ellen Katz at 12:14

Art by Taiko Chandler at the Denver Botanic Garden

During a recent trip to Denver, we enjoyed an art exhibit at the Freyer-Newman Center, the research and exhibtion space wing of the Denver Botanic Garden.  The Indelible Garden: Prints by Taiko Chandler was on view from December 11, 2021 through April 3, 2022. The exhibit featured colorful monoprints and striking, large-scale undulating sculptures created from elements printed on Tyvek. Tyvek is the trade name of a non-woven polyethylene fabric commonly used as a house wrap and for rip-proof envelopes.

Contested Void is made with organza (a sheer fabric), wire, thread and monoprinted Tyvek.  Now a Denver resident, Ms. Chandler is originally from Japan and according to the exhibit website her work is influenced by:

Recollections of the wild forests near her hometown [Nagano], her father's garden, and her mother's ikebana (traditional flower arranging) suffuse her artwork, finding form in the organic, layered shaped of her prints and installations. Chandler's plant-like forms are not intended as literal representtions of nature, but rather interpret its foundational influence on family and memory.

Shortly after returning home, I found this turkeytail fungus while walking near my home.  Life imitating art?
Posted by Ellen Katz at 11:50

A Bouquet from far away


I received an email newsletter from Cheshire Garden, an organic farm in New Hampshire whose proprietors Patti and Ralph used to sell their wonderful preserves and mustards at our local farmer's market.

They no longer visit our market but I still do mail order. Anyway, the newsletter concluded with this wonderful image of zinnias and cosmos, a real pick-me-up on the this gray, wet New England day. I thought I would share.

This month we visited the Cooper-Hewitt Museum in New York City to view a small but impressive exhibit highlighting the work of designer Sophia Crownfield, a professional American artist who developed precise nature studies into prints for textiles and wallpapers.  The exhibit is on view through July 31, 2022.
From the wall text:

From the 1890s to the 1920s, Sophia Crownfield (American, 1862-1929) designed prints for some of the most prominent silk and wallpaper manufacturers in the United States.  Crownfield's interest in design was not a casual one; she was a middle-class working woman who supported herself and her youngest sister Eva through her design career.  Her story shows the hard reality that confronted American designers in a largely freelance system that offered little professional support or recognition.  To record and protect their unique designs, Crownfield and the many others who worked for some of the largest textile firms turned to the United States patent system.

Crownfield first worked in Baltimore as a china decorator, and in 1889, she moved to New York City where she established herself as a professional freelance designer.  Her drawings of flowers range from delicate graphite sketches to vivid color studies, revealing her obvious ease with different types of specimens.  She had a surehanded approach that started with her sketching from stems of live flowers.  Through progressive stages of rework, she developed designs for patterns and polished drawings for specific uses.  Examples of Cheney Brothers' printed silks, show alongside these richly detailed drawings, reveal how Crownfield's process transformed floral stems into the fashionable patterns of the period.

Generation of female designers, both before and after Crownfield, experienced the same invisibility; the notable exceptions were those that were wealthy or well connected.  Recognizing how easily her sister's contributions to American design could be lost, Crownfield's younger sister, the author Gertrude Crownfield, took great care to place her work in institutions such as Cooper Hewitt to preserve her legacy.

Crownfield's design career coincided with the heyday of the Cheney Brothers manufacturing of silk fabrics.  You can read a contemporary promotional history of the company here: https://digital.library.cornell.edu/catalog/hearth4614873

A book about the shirt on your back - Worn

I'm just finishing up this well-received book by Sofi Thanhauser, organized into chapters by fiber families - Linen, Cotton, Silk, Synthetics, and Wool. Thanhauser delves into the history and usage of these fibers in clothing, including a welcome exploration of the impact of manufacturing practices on workers and the environment.  Moreover, as she writes,  “There is scarcely a part of the human experience, historic or current, that the story of clothes does not touch.”
It's an excellent book, despite the lack of images, and is available as an ebook as well.
I hope a paperback will be forthcoming. It's an important and engaging work.

So, a friend cleaned out her yarn stash and gave me two 99-yard skeins of "Maya" yarn produced a while back by the bygone company Classic Elite Yarns.  Ravelry came through again with a pattern by Leslie Friend for fingerless mitts. As I find touch-screen gloves don't work well for me, I thought I'd try these. On the advice of another Ravelry user, I knit with size 5 needles, although the pattern called for size 6.  The result is a nice, dense fabric, and a good fit on my small hands. (DH is modeling in the image.)