Tammis Keefe and Coats and Clark


Thanks to the efforts of my stalwart DH, we've added over 50 handkerchief designs to the Tammis Keefe website, as well as towels, placemats and more furnishing fabrics.


I was fortunate enough to acquire a group of hankies which an expert needleworker, with a good eye for color,  personalized with tatted edgings. Tatting is a form of lace-making, using a special shuttle and thread.  Since some of these items retain their original sticker, it seems they were treasured not for their function, but as objects of delight in and of themselves. Three are featured in this post; as always click on the image to enlarge.


Coats and Clark, the venerable textile company founded in Scotland in 1812, published many pattern books with designs for their line of crochet cotton, which came in a wide variety of colors, such as Chartreuse Green, Hunter's Green and more imaginatively, Killarney, Mandarin Rust, Limefruit, and Devil Red. The instructional booklet above is from 1955, and has a Keefe hankie in the lower right-hand corner. (The two print hankies on the center crease were designed by Keefe's friend Betty Anderson.)

To celebrate its 200th birthday in 2012, Coats and Clark, now owned by the same conglomerate which absorbed Rowan Yarn and FreeSpirit fabrics, created an informative website chronicling the firm's industrial history. In addition, stitchers have shared their stories of sewing, and making things generally, on the website.

So, Keefe's art pops up in a wide variety of places.  Her fabrics are featured in the Museum of Modern Art's Good Design exhibitions in the late 1940's - 1950's; at the same time the publicity department of a huge thread company features her work in crochet booklets.  This inclusion in such disparate venues - cutting across boundaries of class and status -  exemplifies Keefe's broad and enduring appeal.

Two leading lights in the world of textile history died last month.  Anne Hollander, an independent scholar and curator, studied the role of costume (the art world's  portmanteau for apparel) in art throughout history.  Ms. Hollander, in her many books, analyzed how artists, as disparate as sculptors in ancient Greece and the 20th-century British painter Lucian Freud, used clothing and drapery to convey meaning. She pioneered the serious study of fashion and clothing; prior to her work "It [fashion] had this taint of a women's-page subject" stated Judy Thurman, a New Yorker writer quoted in Ms. Hollander's New York Times obituary.

Given that clothing and accessories are freighted with immense symbolism, it seems obvious now that the depiction of apparel - clothing which can signal status, wealth and power, among other characteristics - would seem an obvious focus of study, but this was not always so. A major corrective to this oversight arrived with the 2002 exhibit Fabric of Vision: Dress and Drapery in Painting, curated by Ms. Hollander for Britain's National Gallery.

Ms. Hollander wrote about robes, tailcoats, veils and dresses; Tom Tierney drew them.  Dover books have sold over 4 million copies of his paper doll books, reason enough to sit up and take notice even if the books themselves weren't so charming and, due to his meticulous research, so informative. If you can't get to the Costume Institute at the Metropolitan Museum of Art, Mr. Tierney's books will help scratch the fashion itch. You can even see Kate Middleton in her unmentionables - evidently things have loosened up at Buck House - in the officially sanctioned William & Kate paper doll book.

The phrase "making history come alive" is over-used but nevertheless genuinely describes the utility of Mr. Tierney's books, which can flesh out the opulence  of Tudor England - Henry VIII and his wives - or demonstrate just what Jane Austen meant when she wrote about pelisses and spencer jackets.

Finally, a book about someone very much still with us, Queen Elizabeth II - Dressing the Queen: the Jubilee Wardrobe. As a public figure the Queen must dress the part and has a dedicated and talented wardrobe staff, marshaled by Head Dresser Angela Kelly. This book gives a glimpse of the process for preparing the Queen's wardrobe for the Jubilee Year. Yes, the volume celebrates hereditary rank and privilege, like any reporting on the royal family, although I happen to think the Queen gives good value for money. One tidbit is that, to avoid any unfortunate accidents, small weights are sewn into the hems of some garments.  The images below are taken from the book.

The planning and craftsmanship involved is impressive; protocol plays a role too; during a trip to Ireland, the Queen wore a green suit and hat for an open-car procession. For the opening of the Olympics, two identical peach dresses were made in secret; one worn by a stunt double parachuting into Olympic stadium and one for the Queen, who appeared on the podium with hardly a feather out of place after her apparent sky-dive.  As I said, good value for money.

Tom Tierney's books are available at the Dover site and many bookstores.

I took a class at Quilting by the Lake this summer; DH tagged along and arranged a business meeting nearby. As much as I enjoyed the class, I "skipped school" one day early so we could indulge our interest in American history and visit the Erie Canal Museum in Syracuse, New York. Back in the Pleistocene era, when I was in school, we learned the Erie Canal song in elementary chorus:

There are several more verses to this popular song, written by Thomas Allen in 1905. Why don't we celebrate feats of civil engineering or modes of commercial transportation in songs today?


This 363-mile long waterway, begun in 1817 and opened in 1825, made possible expansion into the Northwest Territories by connecting the Hudson River to the Great Lakes. The lending institutions established to help finance the canal construction became the banks that enabled New York to become the financial capital of the US, eclipsing Philadelphia, Baltimore and Boston as a trade center.

As you can see, where there was once a canal directly in front of the building there is now a highway; the original canal was replaced, and largely rerouted, in 1918. In fact, where I stood to take the picture would have been water or towpath. After the 1918 reconstruction the old canal sections were mostly filled in - what a lost opportunity.

The canal's 36 original locks addressed the elevation differential of about 565 feet as the waterway climbed from the Hudson River to Lake Erie.  A lock is a section of waterway that can be made watertight by closing gates at both ends; water is then pumped into the section to raise the watercraft waiting inside the lock. Shippers paid duties based on the tonnage of their cargo, and the canal boats were weighed at weighlocks, only one of which survives (anywhere in the US) and now houses the Museum.


The highlight of the museum is an actual canal boat, now in permanent drydock, as it were, which visitors can investigate. Many canal boats were family-owned, so, in addition to carrying cargo and passengers, these vessels served as houseboats. Young children wore harnesses so they could be pulled up out of the water quickly in case of falling overboard.

Passengers and crew stood or sat on the upper deck, but in case of a low bridge had to lie prone or go below; hence the song line "Low bridge everybody down." Life-size casts provide a human presence on the boat and elsewhere in the museum. My own Scots-Irish ancestor, David Logan, probably took a canal boat when he emigrated to Rochester, New York, in 1833, and then again when he journeyed further to Buffalo, en route to his final destination in Michigan, around 1850.


The museum also recreated the weighmaster's office, with its desk-with-a-thousand-cubbies, and all-important stove, and has exhibits depicting a period tavern and general store and lots of info on the construction and planning of "Governor Clinton's Ditch," as the project was derisively labelled when first envisioned.

The original canal was replaced in 1918 by the larger New York State Barge Canal, but the 1959 opening of the St. Lawrence Seaway, as well as the growth of railroads and highways, made the canal system obsolete in the second half of the 20th century. There is still some shipping on the canal as well as recreational travel.

On the recommendation of the museum desk, we walked over to Armory Square for a satisfying dinner at an Irish-themed gastro-pub, Kitty Hoynes.

Syracuse is struggling economically, but has many beautiful buildings from its hey-day that escaped the urban renewal impulses of the 1960's.  Fortunately, some far-sighted Syracuse women challenged the planners of Interstate 81, which had been slated to go right over the weighlock building; their efforts saved this irreplaceable piece of our history.


For more images and information on life on the canal, this book can be ordered from the museum gift shop.  No ISBN number, but many historic photos and brief but concise explanatory text. 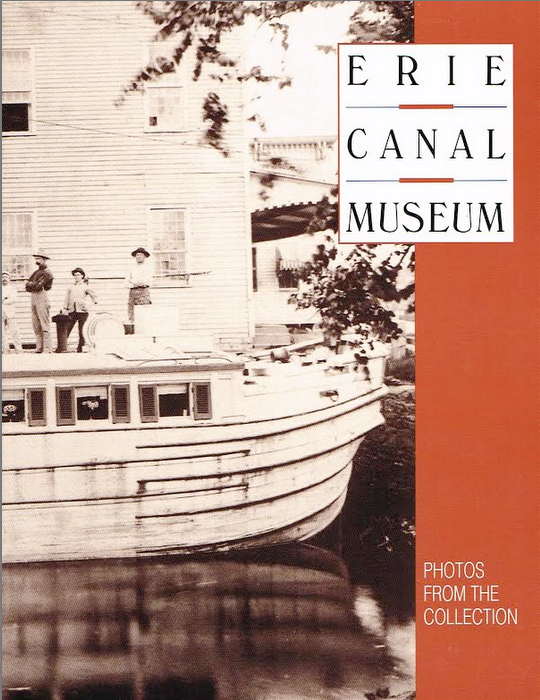