Minnesota is known for many things: rivers and lakes, blizzards and tornadoes, the Twin Cities -  not to mention the Twins baseball team - and a plethora of educational and cultural institutions. Thriving arts centers can be found even in the smallest of Minnesota towns, such as St. Peter, population 10,000, more or less.
During a recent hot August week-end six students, working with textile artist Patricia Freiert, made magic at the Arts Center of St. Peter. Using shibori techniques, and white scarves as our blank canvasses, we created unique, colorful patterns through the alchemy of indigo dye, using nothing more sophisticated than needle and thread.  Shibori is a resist dyeing technique, perfected in Japan, in which fabric is tied and shaped in deliberate designs and patterns.  When the shaped cloth is submersed in a vat, dye is prevented from penetrating the tightly bound areas, which "resist" the dye.

Patricia Freiert, whom we all called Pat, studied shibori extensively when living in Japan during an academic exchange program. A professor emerita of Classics at nearby Gustavus Adolphus College, she now works full-time as a fiber artist and sells her wonderful scarves in galleries nationwide and in the American Craft Council shows.

Pat's focus on circles created with shibori gave the workshop a theme, as well as an insight into how technique interacts with design and motif.  In an indication of her dedication to her students, Pat actually lugged her own indigo vat from her home for us, and had two additional vats available: black and gray, so we had a welcome, but not overwhelming, degree of choice for scarf color schemes.

After settling into our basement workroom, and after brief introductions, we began with a clamped resist technique, or itajime.

Itajime combines folding and clamping of fabric. We fan-folded our scarves lengthwise, then continued folding accordion-style into equilateral triangles (top left image, above.)  Pat explained the folding sequence using paper, which was a good teaching technique.  After folding,  we sandwiched the fabric triangle between two matching Plexiglass discs, and clamped it all together with a standard C-clamp. Wooden discs are traditional, but they must be encased in plastic wrap, so that the dye color doesn't transfer to the wood - any residual pigment might discolor the next project for which the wooden discs are used.  Plexiglass doesn't absorb the dye, so no wrapping is needed.

After three minutes in the indigo, the fabric and clamp assembly was left to damp dry (in yellow bowl, above)  and, when unfolded, revealed a "circle of circles" (drying rack, above image.) 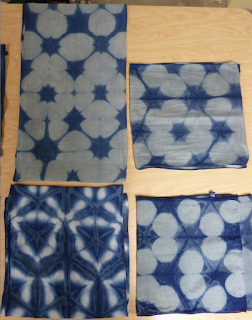 Some of the samples above were dyed in a pale gray fiber-reactive dye before folding and clamping; hence the pretty tonal look.

Of course, itajime can be made using clamped square blocks too, as our classmate Robin demonstrated above with her lovely piece of white squares forming larger squares. The piece in the image above has a greenish cast - when fabrics are removed from the indigo they present as algae green;  as the indigo takes up oxygen from the air the fabric transforms into the desired deep blue. This is one reason it's important to disturb the indigo as little as possible and keep the pot covered when not in use, to prevent oxygen from entering and weakening the vat.

Next, we moved onto a technique new to me: hotaru, or firefly.  Again, we fan-folded our scarves lengthwise, as for itajime, then continued folding to create triangular, rectangular or square bundles, as desired. We also made small cotton balls by wrapping thread tightly around cotton wadding.  A pair of the cotton balls are positioned on opposite sides of the fabric bundle, with a small piece of paper or plastic wrap under each wad to act as a sort of washer.

Finally, using a long doll-maker's needle - it looked like a stiletto - we stitched through the layers. All the way through the fabric and the wads, and then back again. Manipulating needle and thread through all the material was tough, and I finally ended up going through the "leaves" of the folded fabric a few at a time, trying to keep layers and cotton wads in alignment. One pair of cotton balls was enough for me, but different patterns can be created by using additional pairs.

The left image above shows a gray-dyed folded scarf with a cotton wad on top (there's another wad on the back); the whole thing was stitched through and cinched tight. On the right in the image are cotton wads before and after dyeing; one is shown upside down to reveal how the spherical shape leads to a gradation in the penetration of the dye to the scarf. This results in the "fuzzy" edge that looks like the glow of a firefly.  This technique was exasperating, but worth it.


I had pre-dyed my scarf in gray, then it went into a vat of luscious black; it's the scarf at the bottom left in the sample image above.

These two techniques filled our first Friday evening of the three-part week-end workshop.  Next day, when we were in the studio from 9 to 4, with a delicious lunch break at the nearby River Rock cafe, we move onto stitching and binding using a makiage stand.

Makiage combines stitching and binding; sometimes areas are capped too, a technique which essentially waterproofs an area, totally excluding any dye.  First step was to tape down the scarf and draw a pattern, using a vanishing marker.  Almost any shape can be depicted in shibori, but of course our theme was circles.

Once the pattern is drawn, the artist stitches along the lines with a single thread, using running stitches about 1/4" apart; evenness is not too critical.  Pat gave us #4 milliner's needles, which worked well. When all outlines are stitched, the thread is gathered tightly, wrapped around three times, and tied off securely using the kamosage knot. I had that knot down by the end of the day; it's basically the same technique used in casting on in knitting.

Pat gave a demonstration on her maikage stand, and then we went to work.  I used one of the itajime Plexiglass discs and a flat plastic template from home, used for marking my quilt tops. First, I taped down my fabric on the table, and calculated the spacing of my five circles. Design-wise, I like the contrast of rigid geometry with the randomness inherent in the dyeing process.


After marking the circles with a special vanishing marker Pat obtained for us from Japan, I stitched the first circle clockwise, remembering that "the first stitch goes down and the last stitch ends up" - makes it easier to pull the thread to cinch the circle tight. Complete the circle by overlapping one stitch.
After stitching the inner circle, I left a bit of slack in the thread and stitched the outer circle - no need to tie off after the inner circle.  I used cotton thread purchased at a shibori supplier in Arimatsu, but Pat recommends Cebelia crochet thread size 20, by DMC. The all cotton thread swells when wet, making the stitching and knots even tighter, for a successful resist process.

Once my circles were all stitched, I cinched the threads and tied them off. Using a bobbin of the same thread, and the makiage stand, I wrapped the cinched bundles. The metal arm of the stand holds the knotted thread - Pat automatically replaces the end knot after every thread cut - while the artist "weaves" the fabric bundle between the bobbin and the thread held taut by the metal arm.  By my fifth circle, I at least had a notional acquaintance with the technique.

After wrapping the circles in thread, I capped the tips using rectangles of a special thin but tough and pliable vinyl Pat ordered from Japan. Lots of thread and lots of knots.

The next step is to soak the scarves so they are thoroughly wet before entering the dye bath. This ensures better dye dispersal. After dyeing, the knots are carefully removed with a seam ripper. It's easiest to do this when the scarves are dry, but in a workshop setting the artist can't always wait.

Once all the thread is removed, the circles are revealed!  My scarf of five circles is on the right in the image below. The all-white centers are where the vinyl capping prevented any dye from reaching the silk. A variety of techniques result in the varied motifs seen on the scarves to the left and in the center. Really, the possibilities are endless.

The makiage work was the focal point of the day, but Pat also shared many other examples of stitched techniques from her extensive collection.  We also learned  a "quickie" shibori technique, called origami rings, using a cotton bandana square. The square is fan-folded into fourths, then folded into a packet, as shown below.


Our "squares" weren't perfectly square, so there was little "leftover" fabric to finesse. No matter.  We squeezed and tied the corners, soaked the bandanas in water, then in they went into the indigo. And voila! White circles in a blue field. This simple project, which was a relief after the challenges of the makiage stand, gave instant gratification and might be a very good introduction to dyeing for grades 5-8, too.
On the final morning of the workshop Pat introduced  the futate and mame techniques - basically, tying fabric around small items such as beans (mame) or small container lids (futate). This concept is probably the most straight forward of the techniques we covered, and I was glad Pat introduced it on the last day, when it was a bit harder to remain as focused.

When a bean or lid is covered with plastic wrap, or other waterproof material, before tying this is called capping, or boshi, and results in a completely white area where no dye penetrated at all.


The three days went by quickly and rarely have I worked alongside such a nice group of people. I am not smart enough to talk and work at the same time, so the lunch break on Saturday was the perfect way to relax and get to know one another a bit better. We were a varied group - a professor of social work, two retired nursing specialists, a weaver-spinner, one massage therapist and me, all united, though, by a thoughtful teacher and an eagerness to explore the possibilities of design on cloth.